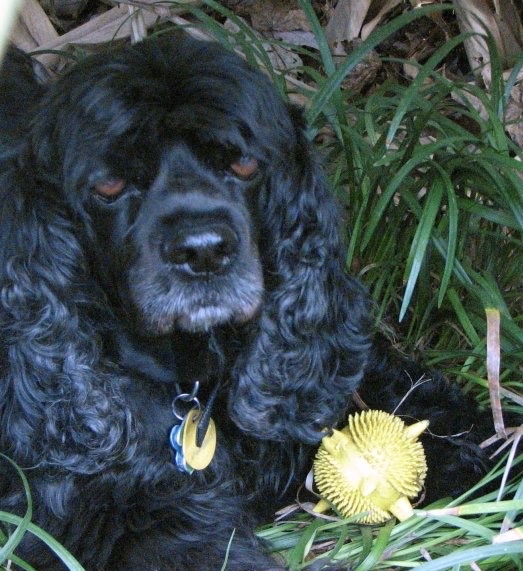 I don't know what made my husband and me think we needed another cocker spaniel, but we made an appointment with Florida Cocker Spaniel Rescue to see if we could find just the right sister for Sierra.  Carol, the owner of the cocker spaniel rescue, had about 100 purebread cockers running around on her 15 acre property (crazy!), so she brought about 25 for us to look at so we could decide, along with the other prospective buyers gathered at a house in Land O Lakes, which Carol used for sales & grooming.

All these candidates were either running in the house or restrained in cages in the back of the van parked in the shade with open doors and windows.  Carol's helper, Pat, took me out to the van to see if I wanted to select a couple of favorites from the cages out there.

I found myself drawn to a darling black cocker spaniel. Pat brought out the wrong one, and it immediately started yipping and barking in the house. Sierra was not pleased with that dog.  Then Pat went back to get the one I liked, and that one was very relaxed.  She was quite friendly and liked the other dogs gathered there with their owners, but she seemed especially drawn to Sierra.

Carol was busily shampooing two cocker spaniels another buyer had stopped by to pick up.  There was a great deal of commotion in the house packed with people and dogs.  But this little female black cocker just stayed on the couch near me, was very relaxed and very fond of being petted.  So she was definitely the one for me and Brian.

Carol had just picked up Sophie from the pound and the poor thing was full of burrs.  Carol directed me to go home to Tampa and said she'd have her all good to go in two hours. She completely shaved Sophie.

I know that the homecoming party Brian and I and Jack (our roomie) threw in honor of our new addition, was quite nice as far as Sophie was concerned.  She was quite fond of the little bits of pizza and the little bit of vanilla ice cream we let her have, in addition to the excellent Science Diet dog food.

So it looked like a real good setup in Sophie's view.  However, as she started to get the lay of the land. it was instantly clear she was very afraid of the back yard.  She watched Sierra run out there but did not deign to join in this frightening enterprise.

However, it quickly became Sophie's custom to follow Sierra wherever she went.  If Sierra jumped on the bed, so did Sophie. Initially, Sierra growled, defending her turf.

To our surprise, Sophie became the boss of the place within 2 or 3 weeks.  She insisted on being first out of the doggy door.  She decided she liked going out into that fenced back yard with or without Sierra. Actually, it became a power struggle over who would get out the doggy door first. Sometimes they'd try to both go out at the same time, but the time they both got stuck together in the opening was a cause for great embarrassment.  After that, Sierra deferred to Sophie.

Sophie then decided that bumping against Sierra with her side or her butt was an enjoyable activity. Sierra tolerated this with aplomb.

Sophie quickly developed some skills Sierra had never thought to learn.  She'd get up on the chair next to the dining table, and bring down some tasty item, like pizza slices. So then Sierra learned this trick, and managed to snag a bagel for the two of them.

Sophie loved to chase things.  She became a flying streak, dashing for a ball before Sierra (four years older) could even get started.

They had different fears and maybe helped each other compensate.  Sophie was scared of the dark, Sierra was afraid of thunder.

They soon began to lie down and nap with each other.  But if an argument occurred, I would often let Sierra know she came first, and would pick her up and cuddle her.  After all, there is such a thing as seniority in this world.

After the two of them had eaten, they would both get up on the bed and roll around and have "love frenzies," much to Brian's and my amusement.

Sophie had a dazed and confused look on her face at times. She wasn't nearly as smart as Sierra who had a great "passive vocabulary," knowing exactly what we were talking about.  Before we got Sophie, Sierra was with us at our condo on the island of Tierra Verde near St. Pete Beach. This was right on the water, and we had a boat.  When we'd say boat, Sierra would run out the door, down the stairs, and through the yard and go wait for us to pick her up and put her in it. There were so many words like that that she knew and would immediately jump into action upon hearing.

Anyway, we had a great time with both doggies.  They moved with us to our Tampa Palms house and loved it there.  Poor dearest Sierra had to be put to sleep in 2009 because of a major heart problem.  In 2010 Sophie came up to the Madison, WI apartment my daughter and I rented while she was preparing for childbirth.  Poor little Sophie became very, very ill over the months, and sadly had to be put down too.  But ah what lovely memories I have of the those two wonderful dogs.

I believe I'd better include a photo of Sophie and Sierra closely monitoring Brian with his dish of ice cream, to round out this story.